"Keep working on a plan. Make no little plans. Make the biggest you can think of, and spend the rest of your life carrying it out." Harry S. Truman

My Global Bookshelf : "Tone Deaf in Bangkok" by Janet Brown 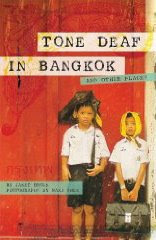 Tone Deaf in Bangkok (And Other Places), published by ThingsAsian Press, is Janet Brown’s travel memoir of how and why she, a middle aged American woman who’d lived in Alaska and Seattle, fell in love with the city of Bangkok, spent several years there, and after returning to Seattle for a while, finally decided to go back for good.

The book itself is beautiful, with photographs from Nana Chen that give a real feel for the day to day life in the city. This is not your usual glossy touristy book about Bangkok. By the time I had followed the author through her journey, and spent time contemplating Nana Chen’s pictures, I felt I knew the place (and the author) a little better.

I spent some time in Bangkok, in 1993, as one of those backpackers that Janet mentions none too affectionately in her pages. It was the perfect base to explore neighboring countries, collect mail at the central Post Office, and get a taste for “civilization” as we Westerners like to call it (that entails air conditioned malls, movie theaters, shopping, and a facial thrown in to try and get some of the dust accumulated during endless bus, motorcycle or train journeys out of my skin). I walked those narrow lanes, visited the city’s many splendors, bargained at the markets, and careened through the streets aboard three-wheeled death defying tuk-tuks. I could have entertained the erroneous notion that I knew Bangkok, except that I always instinctively sensed that you don’t know a place unless you live there - and even then, you have to make the effort to really get to know it.  Janet Brown definitely made that effort.

With beautiful, fluid prose, unwavering honesty, and an elegant sense of humor, the author shares intimate snapshots of her life as a farang, or a guava, from her attempts to speak the tonal language, to her discovery that in order to be truly accepted and welcomed in a foreign country, you must first observe the ways of its people with humility and grace.

I was moved to tears by her discreet and intensely felt account of her love affair with a young Thai who could have been her son. I laughed, while trying to imagine her seating side-saddled on a motorcycle, wearing a skirt and high-heeled sandals to go and visit Khmer ruins on the Cambodian border.

But my favorite moments in the book are those where Janet Brown tries to make sense of her identity - whether defining how she will experience entertainment in a way that suits her tastes and needs, as opposed to just going along with any group, or struggling to understand what it is exactly that makes her feel so vibrant and alive in Bangkok. Reading her, I felt I had found a soul mate - only much braver, and stronger.

During our years in Nigeria, there was an opening for a position in Geneva, Switzerland. My husband mentioned it to me, and my reaction stunned him, and everyone who knew me, and knew of the hardship we’d been experiencing. “No, thank you very much, but I’d rather stay in Nigeria.” Even as I sometimes cried on the plane that took me back from Lagos to Enugu after a vacation abroad, I stubbornly sustained that if I had to choose again between living in Switzerland or living in Nigeria, I would still choose Nigeria. I think Janet would understand me well. Here is what she writes, at the beginning of the book: “I live, at this point in my life, in the ideal American city. Seattle is small enough to be friendly, large enough to be urban, and is surrounded by enough natural beauty to launch a million calendars... Tourists come to the bookstore where I work, raving about this place, and it takes everything I have to keep from saying, “Thanks. Glad you like it. It bores me silly.”

There is not one boring moment, in "Tone Deaf in Bangkok," whether you're eating durians with Janet, celebrating Songkran (the traditional Thai New Year) on Khao San Road, pondering the advantages and benefits of separate toilets fitted in the floor, or weighing the pros and cons of the Bangkok Skytrain (ah, the eternal conflict between efficiency and dullness)...

Read “Tone Deaf in Bangkok (And Other Place).” It will take you on an intimate journey with a funny, generous, independent woman while showing you the heart and many hidden corners of a city (and a few other neighboring places) just as fascinating as your tour guide.

Katia,
You have made me cry. I am so blessed that you have read my book, and that you brought so much intelligence and sensitivity with you when you read it.

Your review is one of the best gifts I have ever been given--and you make my book seem so much better than it could ever possibly be!

So many, many thanks to you. I look forward to the day that we can sit and talk about identity and wanderlust and finding homes and Nigeria and Thailand! I know it will happen someday---and I will be so happy!
Janet

Oh, thank you, Janet. I felt so bad about waiting so long to do this. I have no doubt that our paths will cross, some day, and we'll finally be able to share and swap our stories. In the meantime, it's been a great privilege to be able to get to know you a little from afar.
Take care.
P.S. And don't be so modest ! You're your book's mom, and as such, you should brag about it shamelessly. And the great thing is that it will all be true :) How can it ever get better than that?

This sounds fabulous! Will definitely check it out.

Hey, Suzanne, nice to see you here. Great. I think you'll like it. And how is Call me Okaasan... doing? 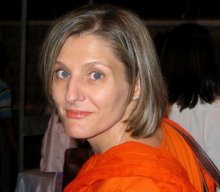 Click on the picture below to find my book ! 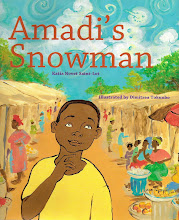 The story of a Nigerian boy, a book, and the opening of worlds.

Children will enjoy reading about Amadi's life in the village, depicted in the earth-toned, intimate scenes. It's a nice reversal that young children will be able to grasp - what looks exotic and faraway to one person is a place where someone else lives. —Booklist

An important addition to any library, this offering fills a necessary niche for current-day stories from other cultures and focuses attention on reading as an important and satisfying accomplishment. —School Library Journal

Purposeful, yet without the heavy didacticism of some books on the topic of literacy, this tale shines a welcome light on cultural differences. —Kirkus Reviews

A reminder of how just one little book can change a persons entire life!

...I believe she [Katia Novet Saint-Lot] is one of the most inspiring picture book authors in these times of global awareness. —Bees Knees Reads

Citizens of The World